Around two years ago, there were several news articles about finding plastic in the placentas of unborn babies. Are we made of plastic? Is it experimental treatments with plastic babies?

So, why was there plastic inside a placenta?

It all began in the 20th century when a Belgian Chemist synthesized plastic. The efforts of this discovery continued with petroleum alliances making products from processing oil and natural gas. Then, a British company created a polymer of polyethylene by accident. It was found to be strong, flexible, and heat resistant. The production aspect is cheap and easy. It was also incredibly versatile and durable. The product is so lasting that it takes around 450 years to decompose fully. Plastic has become the standard for many of our things. Looking around my room, I see plastic in packaging, electronics, pens, machinery, gardening tools, and even snorkeling gear. It seems that this polymer is pretty good for everything!

But what happens when plastic breaks and we can no longer use it? 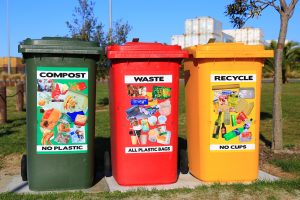 Well, we could throw it away or recycle it. But it will all depend on the type of plastic. There’s a small number on some parts of the plastic component ranging from 1-7 that indicate which type of plastic  it is and the recycling potential for each one. Most of them have recycling potential, but not all countries, or even towns, have the programs or budget to recycle them. Other plastic derivatives can be transformed into fuel. But, the common practice when it comes to plastic is to throw it away.

Where does it end up? 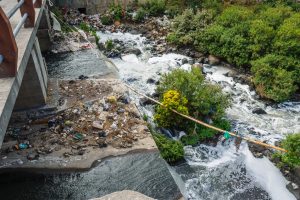 When plastic items are thrown away, they usually end up in a landfill where, in 450 years, they will eventually decompose. Other plastics end up at the side of the road, in inland water bodies, and even at sea. As harmless as they may seem, they break down into smaller pieces. Sometimes so small, they are called microplastics. These microplastics can go anywhere without being perceived. They can go into the soil or water or even be ingested by fish, birds, or other animals. When ingested, they accumulate in their body and can have a toxic effect, cause behavioral changes, or even constipation. The wonderful plastic is now entering the animal food chain.

Aren’t we humans part of the food chain as well?

Yes, indeed, humans are part of the food chain as well. Everything we put into the environment will eventually turn very close to us. So close that when we consume other animals that have ingested plastics, we, too, have plastic in our stomachs. Some articles have shed light on the fact that microplastics have been found in the placenta of unborn babies. Others found the presence of these plastics on breastmilk. The mothers might have consumed or breathed in the microplastics. The source of their presence is not yet clear, but it seems that the presence of microplastics in the environment is a real problem and we can’t avoid the exposure. The effect of this presence on the body is yet unknown. Nonetheless, scientists are concerned that the chemicals from plastics may cause long-term damage, impair the child’s development, or upset the fetus’s immune system.

Could this be avoided?

In this day and age, this damage is done. The presence of microplastics is already a statement in the world. Numerous efforts towards the removal of plastic  are towards picking up trash, enhancing recycling, and even creating new alternatives for the marvelous plastic regime. But it is not enough… We have to think about our actions and the future. Why are enterprises packaging everything in plastic? Why are takeout orders served on plastics? Why do we even buy plastic bottles filled with water? Is there an alternative?

Yes, indeed, there is. It’s called reusable or compostable items. Our efforts must be directed toward using things that are not disposable, like plastic, from having your canteen fill up water, using wooden cutlery, or even bringing your containers for takeout food orders. These are all simple solutions for not using plastics, but modern packaging standards also have to change. And consuming from enterprises that promote these changes, even if it’s a little bit more expensive, has a huge impact on our environment and ourselves.

What are we doing about it? 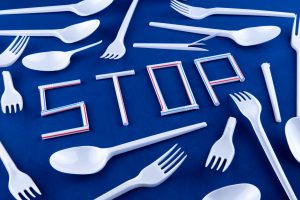 We must start to say the things we do ourselves in the hopes that it will be contagious. Some examples that we’ve seen around us are: leaving plastic cutlery at the restaurant when ordering takeout meals; bringing a reusable bottle everywhere, so that it can be filled instead of buying plastic bottles; ordering a glass of water instead of a plastic bottle, or even refusing water if they only offer plastic bottles. But we can do more…There’s still things around us made of plastic: stickers, trash bags, and wrappings. We should stop buying from places that have plastic wrappings and should bring our own food containers to restaurants.

Do these efforts do something?

Our modern capitalistic way of life thrives on economics. Simple economics tells us about the offer and demand. Where there is more demand, there is more offer. Where there is no demand, there is no point in the offering. If there is no demand for plastics because people have stopped asking for plastic cutlery, they will stop making it. It is as simple as that but more complex to achieve when it comes to global demand for plastic cutlery. It is up to our personal choices to change the way things are done. One person influences three; three influences nine; nine to twenty-seven; and so on… Hopefully, there won’t be more demand for plastic nor the growing appearance of microplastics in placentas.

In conclusion, humans have made a remarkable discovery of durable, cheap, and infinite possibilities of putting plastic everywhere. Plastic is being found everywhere without considering what will happen with mass production. The lengths of its appearances are now in unborn children’s placentas. So, it might be best to avoid acquiring plastic everywhere we go. It might be best actually to make reusable plastic instead of recyclable. Let’s just cut it off at the source… Let’s not use plastic!

PrevPREVIOUS ARTICLESSea level rise: The effects on the seaside