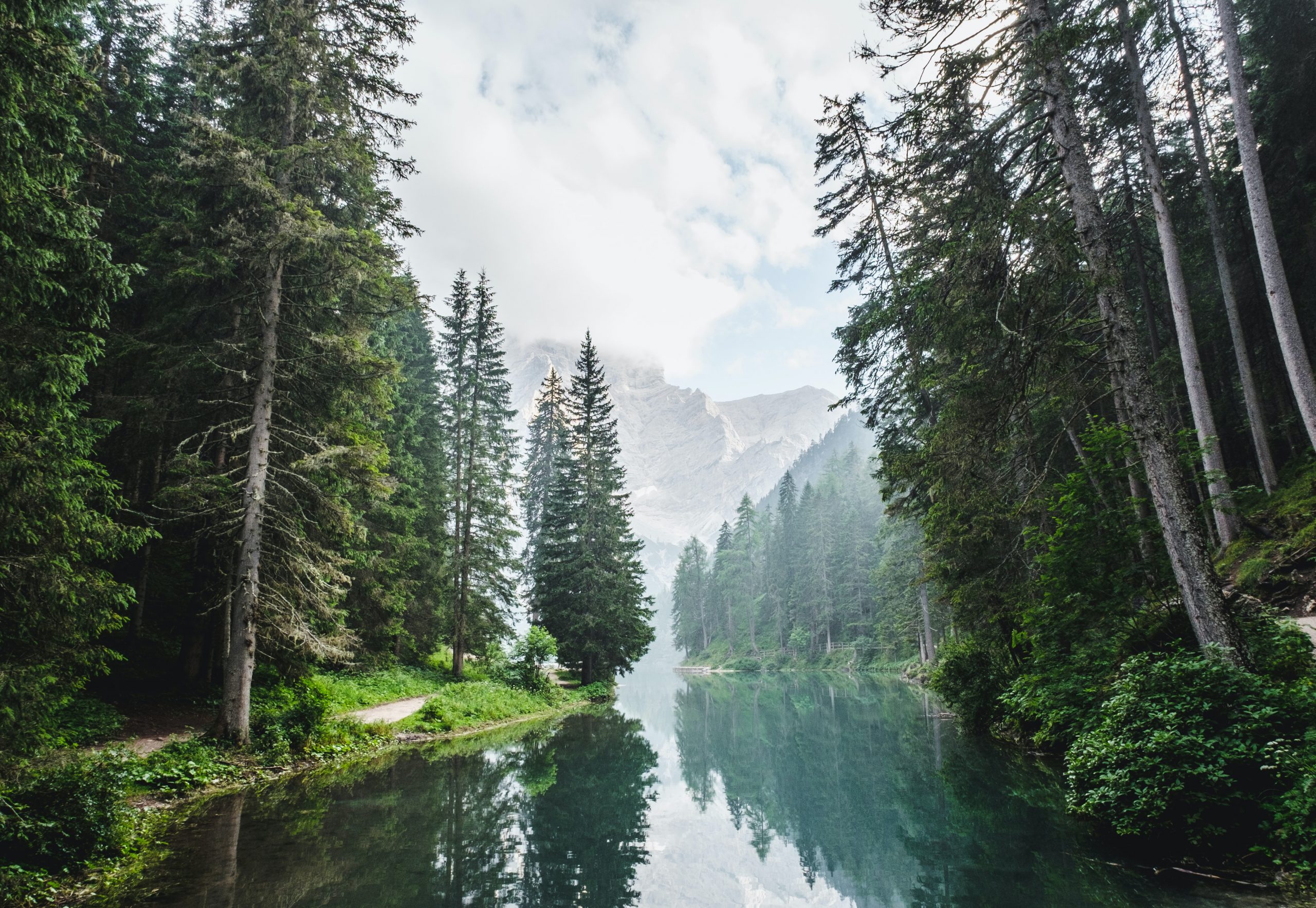 Forests, the solution to all of our problems

When did we start cutting down trees?

The ancient human nomads started making the transition towards a more located lifestyle. First, they opted for smaller geographical locations by settling on valleys and hunting a smaller area. Later, they had stopped chasing animals around the big valleys, so they had to start finding other ways of acquiring food. In that search, fruits & vegetables became a valuable nutritional source in their diet. Agriculture started to take place in order to have proximity to the food source. Fruits and veggies naturally grow on fertile soil since they require a lot of water & nutrients from the ground. These soils are typically found in forested areas. Forests then have the capacity to provide for humans in a nutritional way. So, it made sense to move into areas closer to where the woody vegetation dominated. As humans, we need space in order to settle, so removing wooded areas began as a practice.

Why tear down trees?

Well, as we need a place to live, trees were in the way of making a viable settlement an option. So, we cut it down and start to make space for ourselves. Then we find that it can be used for fire, shelter, tools, canoes, and all other sorts of things. The surrounding clearing then becomes a good place for us to grow food. The woody areas are actually kind of nice because there are no harsh temperatures for us to be too cold or too hot. With these advantages to our side, we start creating a more pleasant way of living, and it becomes a practice to tear down trees and acquire these goodies. What happens is that more and more people begin to populate these areas. Families begin to grow and other groups join the settlement. It then becomes more people to provide wood & food, therefore more trees need to be cut down. So far, not too bad. We can still thrive as a species by living in small/medium communities. But wait, some other community has different food source. Maybe we can trade some of ours for theirs! Let’s make some roads and trade some more. Now we’re migrating to other communities, it keeps growing. A motor that runs on combustion, wood is fire, we can move better, more trees down. Let’s build a city, but tear down more trees. This is getting out of hand… Now we’re having to clear large forested areas for living, and for agriculture. This became a worldwide practice and people start to notice that something is happening with our ways of living. 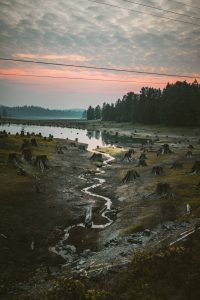 What about large clearings of forest land?

Purposely clearing large forested areas is known as deforestation. This alteration of landscapes, that once was seen as a resourceful way of obtaining food, tools, fuel, and shelter, is now actually damaging our ways of living. The trees that provided fruit are no longer there because we tore it down. The soil that grew veggies and other woody friends is washing away. It’s starting to get too cold or too hot. Desertification, increments in erosion, and climate change, does that ring any bells? If it doesn’t, here’s some context for you. Desertification is a degradation of land where the biological productivity is lost. The previous fertile land is now arid and nothing grows on it. The land where some water was stored, now dries out. Water, following its ancient Newtonian gravitational ways, arrives again where it once travelled and will no longer rest from retainment into the ground. It moves faster, carrying away whatever particles of dirt it can carry with it. Erosion now starts to drag away the soil, rock or dissolved material. Water patterns start to change and landscape patterns. The ocean now receives more sediment. Valleys now encounter huge waves of water from the mountains. Rain is falling heavier on smaller areas and flooding them. Things all around us are changing. The climate is now changing too! This is happening right now, in planet earth, because we wanted live in a settlement and not chase around food so much. But why were forested areas so important for the natural cycle and ourselves?

Why are forests so good? 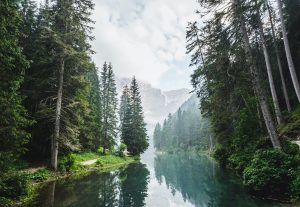 An extensive forest has a huge root system. The roots are the anchor for a plant so it can grow up. You know, like having a good building foundation that doesn’t collapse. As more roots begin to emerge, water comes up the tree. They grow super healthy and other things will integrate into the beautiful root system. The underground root systems catch water by acting as a permeable barrier. The water that comes through the system contains minerals and amazing things that the soil needs to be fertile and grow veggies. The interaction from water, nutrients, and healthy soil allows the woody friends to grow larger and seek light for their leaves. The ever so coloring green landscape interacts with sunlight to produce sugars and energy for the plant (photosynthesis). Also, oxygen begins to produce; carbon dioxide starts to incorporate inside the plant and it goes into their woody bodies to grow even lager. Some plants even incorporate nitrogen into them. As the forests keeps growing, it forms a big area that can block off heavy winds. Then it can function with its sheltering ways once again. Better soil is more food; bigger trees, more hospitable temperatures; more hospitable temperatures, survivable weather. EUREKA! Having more trees will help us with climate changing! Why didn’t we know this before? When did we go wrong? Why not go back to chasing food? It doesn’t matter… There’s nothing we can do about the past, but learn from our mistakes and move forward. We have the information. We started by thinking of better ways of living in our environment and settled. Along with our development and practices for survival, we got lost somewhere. We began to notice that our actions have consequences on the way we live. Learning, growing, writing, passing it down. We know what happens if we tear it down, we know what happens if it’s up. We’re finally thinking again as a human species. Can we restore the forests?

Can we have them back?

We can’t really have them back. There is damage done by our own actions, but there is still some hope left for us… We can find ways of living again in harmony with our environment, hopefully.  But it is worth a shot at, right? We can’t really have the forests back, but we can start creating a new way of living that actually integrates us with our environment, rather than depleting it from the resources.

What can we specifically do? Let us start by having a different way of thinking. It is no longer a way of the environment around us. Now it’s a matter of us being part of the environment. We can actually change our way of thinking from “What can we obtain from this resource?”, to “How do we both benefit from this interaction?”.  We’re not the center of the universe nor everything is around us. We are part of something much larger than us, and it doesn’t matter the name or practice that we call upon it. If we’re going to survive as a species and evolve, we’re going to start thinking of ourselves as integrated with nature and its ways. After all, it was here way before we even appeared as a species.

We can also now study these new ways of interacting and thriving with our environment. We have enough doctors and lawyers. What we actually need is more people that study the natural patterns and put to practice sustainable ways of living. How can we stop producing waste? How can our bodily fluids be used as fertilizer for the soil? How much land do we actually need as an individual? Can ten people thrive on a few acres? What are the components that makeup a sustainable community?

We can also act with plating more trees around us. No matter where we live, we can always find a place for a small tree. Let’s start helping the local people that use regenerative agriculture to produce our local food. The ones that are making an effort towards having better soils free of chemicals and contaminants. Let’s make a small agroecological project of our own in the neighborhood. Let’s make a forest again. Not for preservation, but for eating. Let it be for sustainable agroforestry practices. It doesn’t really matter where you start… Just the starting act itself is enough and will send ripples that turn into waves, and into movements. Get creative, but we have got to plant more trees.

In summary, transitioning from a nomadic lifestyle to settlements started a series of catastrophic events. Removing trees, agriculture, the need for food, expanding communities, making things efficient, and larger settlements. This all took a downward spiral into what we now call climate change. Forests are actually where food grows, where the soil is most fertile, and where we actually can live. If we remove the forests, the soil decertifies, it erodes, the climate keeps changing, and we’re going to be doomed. But if we start making efforts to live beneficially with forests, we might actually make it for a few more years. Our choice, completely up to us. 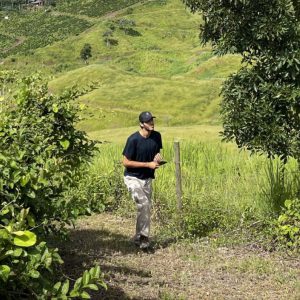 PrevPREVIOUS ARTICLESOld, wise & powerful sea reptiles are threatened by the ignorant species
NEXT ARTICLESea level rise: The effects on the seasideNext